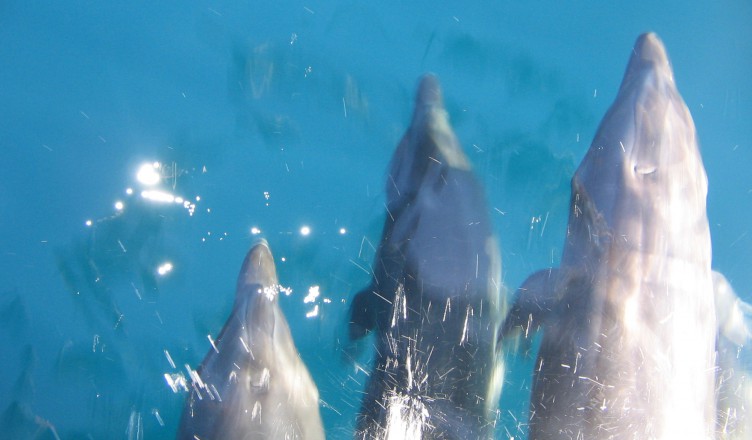 We did Ecuador very quick, “just” 6 weeks! For us that is VERY quick. And it even included 18 days on the Galápagos. But that was then absolute a highlight of our trip through Ecuaodor; animals where ever you looked. Like the dolphins you see on this picture on the left, 10 dolphins playing around our daytrip-boat to Bartolomé.  We did not do the Galápagos on a cruise, but independent. Bas already wrote an article about that. In this article we give you insight in where we went and what we did in Ecuador.

Our route trough Ecuador & the Galápagos

We had a nice meeting with Sander (with whom we stayed in Bogota, Colombia for 3 weeks) in the hostel Secret Garden, which by the way does NOT have a garden. We had a nice party, but the owner did not like that, and almost kicked us out. At the end we could stay, but after another night we decided to look for another hostel, L´Auberge, whith a garden (no secret) and kitchen and a more mature atmosphere. What we did in Quito? You can see that in the Quito-stad album. 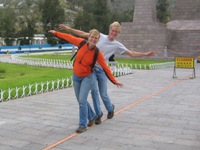 The fake and real equator
A standard day-out is going to the Monument of the middle-of-the earth. Fun, jumping from south to north. But it´s fake, it´s wrong, the line there is NOT on the equator! They made a mistake. This and more was all was explained in a building there from organization “Quitsa-To”. They explained about a real momument of the Middle of the Earth, made by pre-inca inhabitants, and…. exactly on the equator. The next day we visited it with a guide form “Quitsa-To”. It´s called “Catequilla”, and we were very impressed by the stories about the culture of these sites.  If you want more information, write to 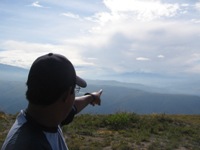 cristocobo@yahoo.com. They don´t have a website yet, but do have a CD and DVD with more information. We copied some information and put it in an album:  Background information Catequilla fotoalbum, a subalbum of the fotoalbum of the real equator. But…. the “comercial” ecautor is still fun, see the  fotoalbum of Mitad Del Mundo. 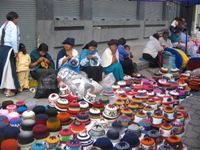 A bit disappointed at the market of Otavalo
Otavalo has one of the most important souvenir markets of South America. Well to be short, we were disappointed. We did see and buy some nice souvenirs, but it can not be compared to the market of Chichicastenango, Guatemala. Compare for yourself, here are the pictures of Otavalo. 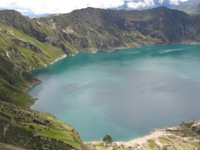 We did a standard loop, called the Quilotoa loop. Standard or not, it´s worth doing. The busride is great, and we did some nice hiking to the crater of Quilotoa. We were lucky with the weather, only at the end some rain. But then it’s very nice to come back to the hostel, with a wood fire and a nice cup of tea. Great service of Hostal Mama Hilda! See the fotoalbum of the Quilotoa Loop. 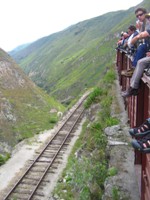 Great trainjourney over the Nariz del Diablo
Constructed around the 1900’s, and now only active to tour tourists around. But it’s worth it, because it’s an incredible journey. A railtrack so steep that there was no place for curves. Nowadays they would have made a tunnel, but then not, so you zig-zag down and up a steep mountain on top of the train-wagons. It takes almost a whole day, with rain, sun and fun. See the foto‘s in the fotoalbum of the Nariz del Diablo. 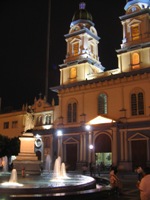 Guayaquil, jump-off-point for the Galapagos islands
Everybody says this town is dangerous. And we wouldn´t have gone here either if the flying to the Galápagos wouldn´t have been cheaper from here. But looking afterwards, it was a good visit. Before they had a very dangerous riverside, but now it´s transformed into an impressive waterfront-park. (see http://www.malecon2000.org/) For our pictures see fotoalbum of Guayaquil. 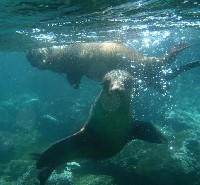 Galapagos, a great experience
Absolute a highlight of our trip through Ecuador: the Galápagos. We did not book a tour, but did it independent. Bas wrote a whole article about it, see here. We snorkeled with sea-lions, dived with sharks and turtles. Saw dolphins in front of the daytrip-boat, met sailors from Sweden whith whom we sailed to another island, we saw “wild” giant-turtles, and captive giant-turtles having sex. 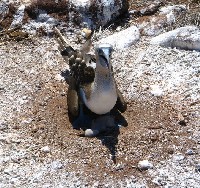 To much to mention, but it was great! The pictures are orderd by island and activity:
San Cristobal:
Diving and snorkling Leon Dormido
Other pictures San Cristóbal 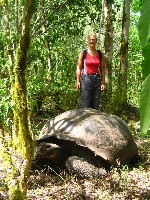 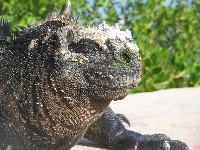 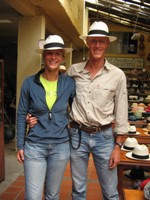 Cuenca, a cold town, but warm welcome
After the tropical climate of the Galapagos we went straight to Cuenca, a beautifull, but cold town, high in the mountains. But we stayed in a nice hostel with a very welcoming familie, Casa Sol (address Estévez de Toral 10-33 y Gran Colombia). And besides them… all people were nice there! The region is famous for the making of the Panama Hats, yes it sounds weird, but the Panama Hat is made in Ecuador! We visisted some villages around (see the photoalbum of Sigsig) and just had a very nice time there. See the pictures of Cuenca.
Our plans
Right now we are in Peru. Our plans so far are to go down to Bolivia, Argentina and Chili, to be in the south of South-America in December/Januari so that we’re there when the weather is best. And maybe we also go to Antartica.
Cheers!
Bas and Eelco