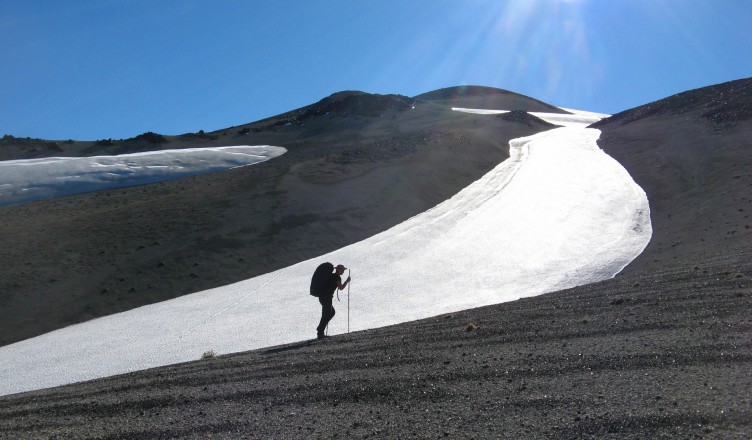 We went trekking around Volcan Puyehue. First day to campsite Perdida, the second day to refugio El Caulle and climbing Volcan Puyehue and the third day to Baños de Caulle and Los Geisers. Most people go back to the refugio but we did the alternative finish, Ruta Los Americanos. We used the map they sell at the restaurant and the LP Trekking in the Patagonian Andes. The trek is quite clear in the first part (refugio El Caulle, volcan Puyehue, Baños de Caulle and Los Geisers) but the second part is not well marked and the LP does not give a lot of information. Here is some information so you won’t have to look and search and backtrack as much as we did.

Getting to the start of the trek
The LP Trekking in the Patogonian Andes is a bit confusing where to be for the start of the trek. Make the bus stop at the sign ‘Restaurante El Caulle’ and walk to the restaurant. Here you register, pay the entrance fee and buy a map. You can also leave luggage. There is no hosteria, just a restaurant and some cabañas.

To Campemento Perdido and Refugio Caulle
Afterwards follow the trail until there is a fork and take the left one (at Campamento Los Ciervos). No signposts, no wooden posts, just go up, past the bulldozed track, the flat until you reach a fence. For Campamento Perdido turn left until you reach some tables, otherwise go through the fence and climb up. You will pass two streams and in our case there was no water at the refugio (feb 2007) so make sure that you fill your bottles at the second stream. You will be sorry if you don’t (watersupply is 20 minutes up the volcano from the refugio).

To Los Baños
Trail is clear on the volcano. After 45 minutes to an hour there is a stream where you can fill your waterbottles again. After the sign to track Los Americanos the bamboo stick sometimes are harder to find but path is still clear. From December till February there are horseflies at Los Baños and they make the paradise a little less fun. There are also no signs at the campsites of Baños 1 and 2. You also get the question which site is better, Baños 1 or 2? It depends what you want, the pool at Baños 2 is nicer; the campsite is cleaner at Baños 1.

To Los Geisers
Take some flipflops with you, the path is a lot easier when you can cross the small above ankle deep rivers. But also take your normal shoes with you because the geisers fields can be hot and steamy.

To Ruta Los Americanos, to the valley
Don’t let the map fool you. According to the map it takes only 1,7 hrs to Campemento Piuquenes. This might so if the path is clear marked. It took us 4 hours.
Another warning the first part is very exposed to the wind, so if the weather is bad don’t take this route. 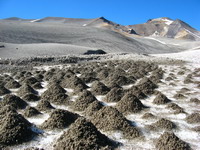 Take enough water with you from Los Baños. The first water source will be the valley and this can take 4 hours.
From the turnoffpoint Los Baños-Los Americanos there are only two more bamboo sticks so there is no need for going back to that point. Walking back from Los Baños to the refugio you see the brown mountain (on the left) which makes a saddle with the volcano (in the right). The path stays close to that brown mountain. Near the rigde of the saddle you will find hopefully another bamboo stick only one in a loooong time. Cross the glacier with the sanddunes, just like the picture to the right only bigger sanddunes, about a meter in height. After this try to stay on this level. We saw some footsteps going down and that was not the path. Anything you go down, you have to go up. Because there are no more bamboosticks here is the idea of the path. You see the mountain laying in the east. The path goes to the valley just below that mountain. The easiest way to get there is to go to the most left rigde that still points to that mountain. On this ridge you will find some bamboo sticks all laying down, too much wind.Go down over that ridge into the valley. And here is a lovely lunch spot.

You know you’ve reached Campemento Piuquenes if you see two white sticks with a sign Camping and an arrow to the left, see the red arrow on the picture. This picture is facing north and you will reach the campemento facing south. A pitty because the campsite is realy nice, kind of swimmingpool, cold shower and beautiful surroundings. A rabbit disappeared over the hill and because of the horseflies we also decided to move to the next campemento. 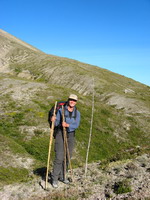 It took us again 4 hours from Campemento Piuquenes to Campemento Las Lengas.
Follow the river  and suddenly you will see bamboo sticks again (after 3 hours). Here you will see the ridge where you can come down if you would have choosen to go up in the valley. The path goes up again and you see the waterfalls from above. Finding the campemento Las Lengas is tricky again because in the end the bamboo sticks dissapear again. The path goes to the third ridge to the right, counting from the river You will find bamboo sticks again here. Follow this third rigde to the end, go down, cross the river and do the final climb up again. The campemento is recognizable with two wite sticks and still the camping site sign hanging in between.

From Campemento Las Lengas to the old road and campemento La Junta
The map says only 2,4 hours, it took us 6,5 hours including breaks. About 4 hours to reach the treeline and 2 hours to get to the old road.
The day started good, there is a path going west to east at the campsite not one going south like on the map. We found 2 walking sticks going west to the volcano and followed them. When you walk to the volcano you see a lot of ridges and we didn’t want to go up and down and up and down etc. We decided to climb high up until the path around the volcano was almost flat. We crossed the glacier river and make sure to get enough water from this river. The next watersupply will be at the old road. From here you slightly go down, keep looking at the east for bamboosticks. We navigated on two twin brown mountains and suddenly there was a bamboostick again!, close to the treeline.

After the treeline there are no bamboosticks anymore but the path is clear and goes always down. First through dry forest and gradually to rainforest. In the rainforest you cross a cattlegrid and a kind of campsite (no water). This is a nice place to have lunch without horseflies. After that the path becomes steep until a clearing in the forest. Here it looks like there is no path anymore but search to your right for a path. After 2 hours you will reach the old road. Five minutes from here you find campsite La Junta with a iron shed, nice shelter when it’s raining.

The old road
It took us 5 hours from campsite La Junta to the restaurante El Caulle. The path is clear, but can be muddy. Even after at least 5 days without rain there was a lot of mud. Waterfall Huemul is realy nice, the biggest we saw.
Also keep looking out for animals, we saw of course cows but also a boar (wild pig). Near the restaurant you can camp and take a shower for 1000 pesos pp. In the restaurant they can call an autobus for you which will pick you up at 10:30 in the morning for 3500 pesos pp. Might be cheaper to go to the road and try to catch a bus from here. 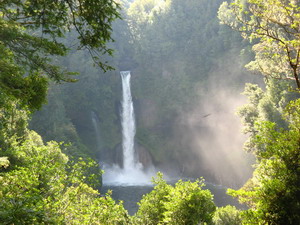