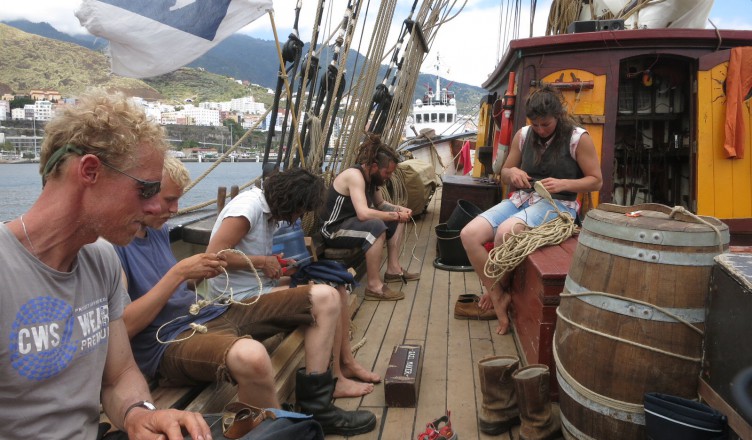 The last stop for the great crossing, La Palma. Last week we went here on sailing in the harbour. Some empty vessels that we had loaded in Duarnenez be here filled with rum and loaded again for sale as Tres Hombres rum in Netherlands.

On sailing the harbour in

Already a few hours before we would reach La Palma, they started with the preparations. The construction cables and the anchors were deposited, the last instructions are handed out by the master. Everyone gets one or more specific tasks so that everyone will know what to process. During this kind of maneuvers, it is all hands on deck, both the duty guard as the waiting that actually would be allowed to sleep than necessary. And there are all kinds of scenarios prepared. If the building fail, then the dingy (our rubber boat with motor) and the tug stand-by. Several people are ready to throw to the quay lines to increase the chances of success. When we approached La Palma was therefore the dingy prepared and launched. The Tres Hombres then returned again to the dingy to sail an opportunity to present to the port. After a few times Lai was so far. And that is pretty exciting, because we do not have a brake or a backwards. All the sails were on command of Captain Lammert ironed. The Tres Hombres slowed, near the quay lines were thrown out, and they were all touch! So fast the construction cables to the quay, to the bollards and when we were laid out, according to the book! An hour later we had to ‘ get ‘ the Tres Hombres hand away. Heavy work, but then as a reward in the city, on to the beer.

Maintenance on the ship 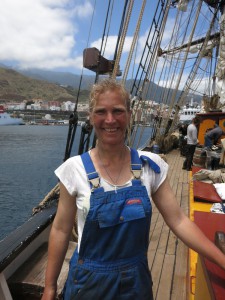 This is the last port for the crossing to Grenada. That crossing is about three weeks. So we have here the last possibility of supplies and maintenance on the ship. Ropes are checked and, if necessary, replaced or repaired. And various rope connections are in the tar. A dirty design, quite annoying when you have to do that in the mast. With a pot black tar and a brush, dangling from your harness, you should then the rope ladders on. Normal is that climbing difficult, but with a pot tar between your legs, you so should keep right, but everywhere behind hooks, you must be between the ropes and staging by Wright. That means climbing in slow motion, but also guaranteed to get dirty. The jobs are done, take turns so you also get the chance to enjoy the island’s, but that there is always someone on the boat.

Day out with the whole crew 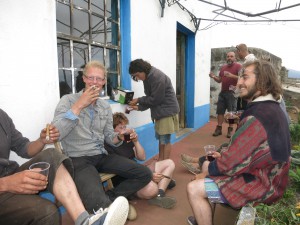 Yesterday had Captain Lammert with the owners of a rum distillery and a cigar factory organised a day out for the whole crew. We visited the rum distillery Aldea (of which we also tomorrow the rum go loading), swam in the natural swimming pool next to it, and visited the organic tobacco plantation and cigar factory (you) by a friend of his. There was also barbecued and enjoyed the view, the rum and the fantastic company. A top day, and with bags full of rum and cigars and a belly full of food and drink we were brought back to the boat.

About three weeks crossing ahead 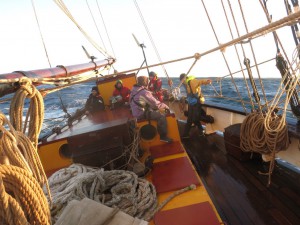 The crossing is about three weeks. That means three weeks long wait turns. Which can be quite long and can be quite heavy. We run three four-hour wait at night and during the day, two six-hour wait. Sometimes a wait so beyond because there is much to do, but sometimes it’s simply really wait. And then you stand there, four hours long, in the dark and the cold, wait until you get back to bed. Other times you have the very busy, hoisted the sails and had to be ironed and you had to tack and also then you’re glad you back to bed. Bass and I sit in a different guard. We see each other only at the changing of the guard, or if one wants to or not the full six hours during the day. And though we each have their own bed, we share one bed. Bass her bed is the upper of the two, where the inklauteren is, moreover, also apart from very difficult but just sufficient space on your side. We share a bed, but are never there together at the same time. Keeps the relationship exciting shall we say.

Again someone who is leaving us

Unfortunately, here on La Palma also leave us someone again unplanned. And that is already the fourth. All for different reasons. The first was the ‘ first mate ‘ that are not comfortable in the Group lag, then someone from whom his mother was dying. Later the bosun because he was gone because there were too few experienced people but now rather wanted to run his own plans again. And now someone who had come to the conclusion that it is emotionally too heavy for him to run to keep the wait three weeks and scared is that it goes wrong somewhere in the middle of the sea.

Both a physical and mental challenge

And so you see again that sailing with the Tres Hombres no relaxed cruise tour is. If you can handle it is fantastic, but if you physically or mentally not to can is it heavy. The great thing is that your body adjusts quickly, if you for example, then our hands are now full of dirt and calluses and also the muscles are stronger. And even if people during the trip not really appreciated often finds it to be a particularly valuable experience afterwards. So there was a German boy who just physically too heavy and was glad that he found there in Douarnenez went off. But, in an email he gave now to still sneak out to a follow-up trip. It does so with some people.

We will now enjoy La Palma. Tomorrow we load the rum in and we are doing the final preparations for the great crossing. It feels very exciting to, how will it go, what will be the weather, what is the wind, how long does it take and how will than the arrival on Grenada. In a few weeks we will know.

Photos of Madeira to La Palma