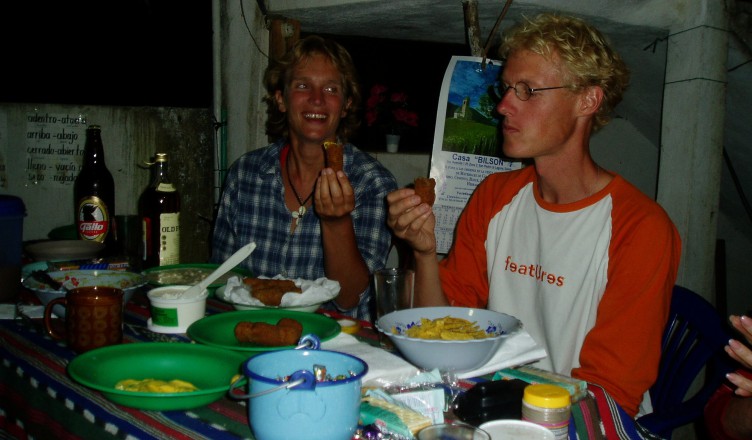 Bas her anniversary!!
Bas her anniversary has been celebrated spectacularly.  In the morning she got her first presents of Kay and Eelco. Eelco gave her her first Spanish readingbook for 9-years old…. (by the way, she´s 33 now) and Kay gave here a very nice shirt. After the breakfast the kroketten and and bitterballen were made for the night. After that it was time to pick up the the ordered chocolate cake.

Hitting the Piñata
On the way we visited the shool, where we had organised the hitting of the piñata. The piñata is a custom in Central-America for many fiesta´s, so also birthdays. 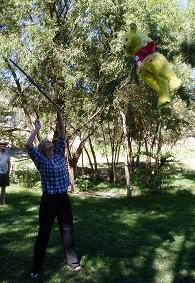 A piñata is a paper doll filled with candies. Blindfolded you (bas) have to try to hit the doll and break it, so that the candies are released. But meanwhile an other (eelco) pulls a rope so that the doll is dancing. Very funny, especially for the spectators. After Bas it was Kay´s turn, and after Kay it was Chris who hit the final beat. After that everbody went for the candies!!!!

Picking up the cake
After the pinata we picked up the cake. But we were exactly in time, and they didn´t expect that. So we waited, but that was absolutely wirth it. Incredibaly delicious.

Mail from Holland
A big suprice was the mail from holland. Exactly on her birthday a package with birthday cards arrived. Pitty for Eelco, because the reason for the package was that he needed some parts for his sunglasses. And they weren´t in it. We suspect they fell out with the inspection of the Guatemala customs.

In the afternoon and in the evening a lot of (different) people came visiting Bas. Bas invited both local people and students. Especially the local people were very delighted with all the food available. It was much more, and much more diverse then they were used to.

Kroketten in the oil
At night the kroketten and bitterballen were put into the oil. The were good, but not as we´re used to in Holland. In fact they were to good, to much real meat. In 8 months we are going to try it again at Eelco´s birthday. The other students made drinks and other snacks so that it became a good party! See the pictures in the album of bas her birthday.

Goodbye to Kay
Last friday we went to Santiago with Aaron. Because we had to leave early, that was also our goodbye with Kay. After more then 2 months travelling together the family is split. She will first go to Antigua to get her tooth fixed. Then she wants to celebrate carnaval in Panama. And after that she´ll return to San Pedro to get her stuff she left behind and go home. So the chances are very big that we´ll meet here again. But for now… we´re with the 2 of us again….;-(

Maximon, the wooden god who smokes and drinks

Santiago is on the other side of the lake. We went there by boat. It is (again) a very nice, colourfull market. Most special about it was the visit to Maximon, a wooden doll, honoured because he´s a god. The feed him alcohol and give him sigares. See the pictures here.

Walking to San Marco
With Kay I already visited San Marcos before, by pickup-truck. But now we went with Chris, Kay, Bas en Eelco, walking, by following the coast. See the album.

And now… we´ll realy leave this town!!!
For several reason we now want to leave this town. First is that we´ve seen it here now, second, we want to show you other pictures, and third, there are more and more tourists here. Loud speaking americans, sometimes realy embarrasing. Monday we´ll do another climb here, we also want to do some kayakking, but after that we´re gone!