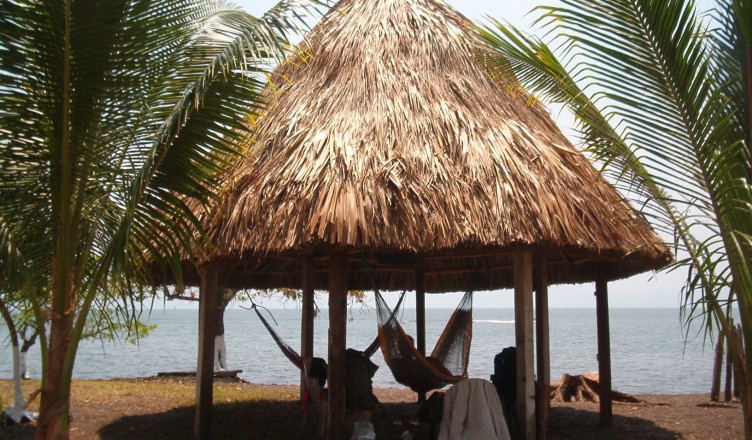 We´ve been sweating a lot, last few weeks. Because we suffered tropical temperatures on almost all places we visited. Sometimes it was nice, like on the picture on the left. But other times we realy did NOT enjoy it at all.

First a nice climate at Finca Ixobel
We stayed at Finca Ixobel near Poptún, a popular travellers hangout for decennia. And we enjoyed it too!The climate was good, not too hot, not too cold. The cabaña was spacious and airy, and enough space to walk around the finca. You could cook your own meal on woodfire, but there was also a great all-you-can-eat buffet with 2 types of meat, a lot of vegetables and salades and lemonade, coffee and tea. And that all for only 5 euro PP! Enjoy with us on the photo´s of this finca.

San Felipe
From the nice climate of Finca Ixobel we arrived in the tropical heat of Rio Dulce. From there we walked (yes, we´re nuts) to San Felipe, which meant a LOT of sweat!!! In San Felipe it was very clear that Semana Santa was coming, because it was crowded with Guatemaltecan tourists. We visisted El Castillo, a rebuild old Spanish fortress. Around this fortress you can picknick, bbq, and hangaround. Naturaly a popular spot for the Guatemaltecan tourists. For us it was nice to see, but not nice enough to hang around more then one day. Photos of recreating Guatemaltecans and the castle can you see here.

Hanging around at Finca El Paraiso

Another finca where we could spend the night. A beautifull finca near Laguna Izabal. There were no cabañas any more, but.. they did have a spot for hammocks including 2 hammocks!! And that was beautifull, much nicer then a room because of the wind blowing through. And even cheaper. Local girls sold al types of fruits and fried fish with tortillas. So without leaving your hammock you could get all you wanted. We ´hang´ around here for 2 nights.

Green energy in El Estor
Except hanging around we´ve also been active. We visited the neigbouring and boring village of El Estor. Not much to do there. Also Shell didn´t have a booming business here we saw. Unless this is an expiriment with green energy?

Another activity was the visisting of the Agua Calliente. Very special because very hot water comes down, and from under, very cold water comes up! This all creates a special swimming tropical sauna experience.

The finca was getting crowded

because of Semana Santa. Partly annoying, because they like their motorised pleasures. Motorbikes, waterscooters and (mini)quads are being brought with them. A pity of the quietness. But the good part is that we are almost the only foreign tourists. This causes a lot of attention which is very good for our Spanish. We also talked a lot with the family who owns the spot. And with some beers it becomes much easier to speak Spanish. This was not the case for Eduardo, he fell asleep soon. Are we that boring???

Tropical suffering in Quiriguá
The lonley planet already told us it would be hot and humid here. Well they were right! We had to stand in a very hot bus for an hour. Bas started to feel sick in there so that she had to get out on every stop for some relatively cool air. After arrivig in Quiriguá we had to walk for a 3 Km´s in the heat, so you can imagen that we were enjoying ourselves a lot. But the room we got in ´Hotel Royal´ seemed very nice and cool. But later on we realized that this was

relative. Because at night, outside the air got cooler, but our room stayed the same: hot!! And we had no windows, no van but with a family of nice cockroaches.

But… Bas did get some sleep. At last, more then Eelco. He was suffering from swollen hands because of heatbumps on his hands and a very bad bed. He suffered from headaches and backaches for days after this.

The ruïnes of Quiriguá
We visisted Quirigua because of the ruïnes. And we were not disapointed. Very impressive stelaes in a beautifull tropical park.  See it all in the photoalbum of Quiriguá.

And now…
We now know what we did with Semana Santa. But we keep it a small secret for you now. We do let you know that we went somewhere without heat and without a lot of tourists. Happy easter!