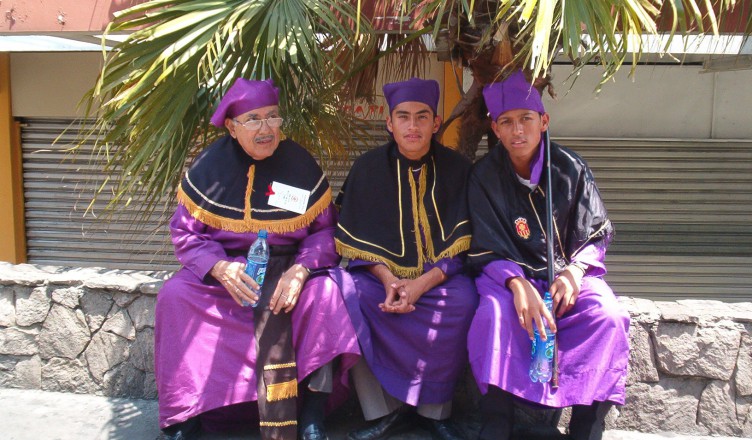 Survived the most dangerous city of the most dangerous country of Central America
To avoid the big crowds of Antigua during Semana Santa, we decided to spend Semana Santa in Guatemala City. We already wanted to go there to look for a new camera. And according to the Lonely Planet all the pickpocket-thiefs would be in Antigua, so this should be the safest week to visit the capital. And we survived!

Looking for a camera in Zone 10

We hoped that some shops would be open on thursday. But.. no, not realy. But it gave us a unique look at the city. Big lanes in Zona 10 without any cars! We did not find a camera that day, but we did see minister Rumsfeld of the USA crossing the street! He was visisting Guatemala and crossed the street without very much protection. Alas, it went to quick to take a picture. 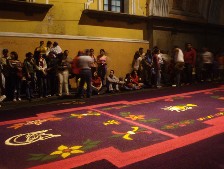 Second night going out
The first night we stayed insite, but the second night we decided to watch the processions. Very impressive al these beautifull carpets of colored sawdust, flowers and fruit. We also had a real Guatemala City experience. On the middle of a crossing a man was shot. Police was investigating it and looking for bullets. Very scary, we could see the man on the floor with a lot of blood streaming out of his body. It made us realise we were in a dangerous city. 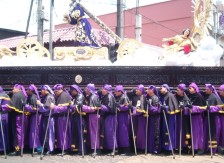 More processions
Next days we watched more and even bigger processions. Carried by men, women or children. Especially the big one was very impressive, carried by 140 men! You get the best impression of it when you watch the movies. They´re in the Guatemala City album.

Queensday in Guatemala
The day felt to us like Queensday in Amsterdam. You could eat and drink everywhere. It was probably the most safest week to visist Guatemala City. We enjoyed it a lot!

Again looking for a camera

in Zona 10
After the weekend the city started to live again. Shops and restaurants opened. And sometimes zona 10 didn´t look Guatemalan at all, like on the picture on the right. We had wonderfull breakfasts at a bakkery with delicious french croissants and baquettes. What a luxuary.
And … we succeeded in buying a camera. From our long-list we could find 4 camera´s, and decided to buy the Canon Powershot A400. And till now we´re very happy with it.

Musea visits
After the weekend, also the museas opened. And we´re glad we visited them. It gave a whole different insight on the culture of the maya´s. We saw beautifull pottery and jewelary of different periods of the Maya´s. All pictures are in the album about Guatemala city.

Making cheap phonecalls with Skype!
A last highlight was the discovery of Skype. Forget chatting, from now on we call family and friends back home for 1,7 eurocent per minute! And if you subscribe yourself we can call you for FREE!!!!

Back in San Pedro
Like we said, we´re back in San Pedro, to collect our stuff and do 2 more weeks of Spanish study. After that we´ll go to Antigua, Monterrico (on the coast) and Escuipulas in the mountains. and then: El Salvador!