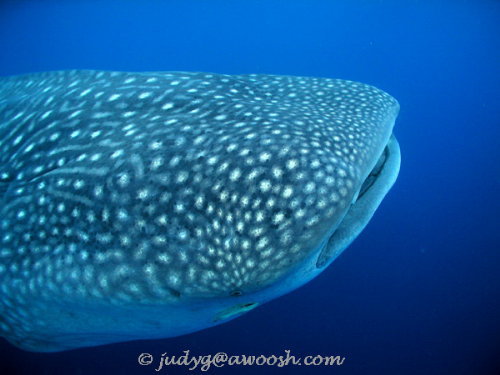 Oke, this is not our picture, but it’s how we realy saw a Whale Shark while diving and snorkling around Utila, Honduras. At the moment (11th of july) we’re in Trujillo, preparing ourselves for the Mosquitia. So far we’ve been in Gracias, Santa Rosa, Copan, Omoa, La Ceiba, Utila, Sambo Creek and now in Trujillo. You can see the pictures in the album of Honduras. After the Mosquiti we plan to go to the capital (Tegucigalpa) and then quickly to Nicaragua, because they only gave us 30 days for Honduras, so we have to be out of here the 23th of July.

As you might have noticed, we don’t translate the complete dutch stories anymore into english. We noticed that most foreign people directly went for the photoalbum. If you do want to read them, try translating them yourself by using www.worldlingo.com, or learn Dutch!