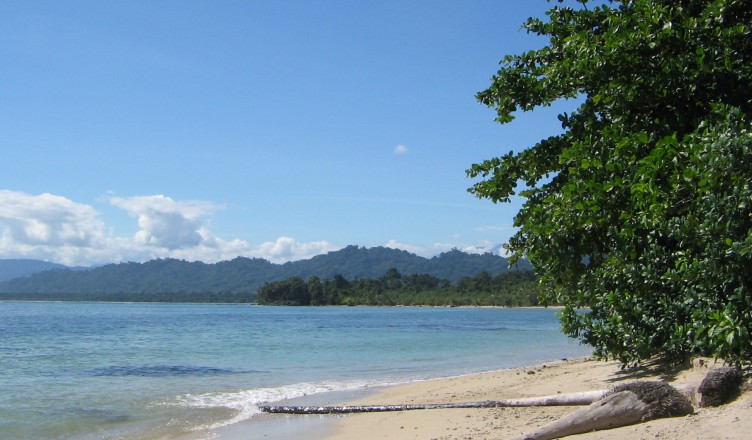 To provide the non-dutch speakers also with some information about our trip, we will try to post a story so now and then in English. Most probably we´ll do this per country. And this is the first: Costa Rica, the country of beautifull nature. But also the country with a lot of tourists and the highest costs from whole Central America. Because of that, we planned to make it a short visit, just touching some highlights, visit an old schoolfriend in Paraiso, and then quickly to Panama. But …. that plan did not realy work out, as plans never tend to do! We had some bad weather and healthproblems, but we conquered that all and were rewarded with some last beautifull days in Cahuita, on the caribean cost near Panama, see the picture here on the left.

A hernia
Our visit was overshadowed by 2 ugly causes: my healthproblems and the weather. To begin with the last, we had shitty weather. Ofcourse, expectable, but still not nice. So we stayed inside a lot, which was not always bad, because I couldn´t walk anyway! To be short: it started with pain in my left hip in Honduras, that got worse in Nicaragua. We took some rest and medications (Ibuprofen). But it immediately returned in Costa Rica and the pain spread out to my whole leg, and eventualy also to my right leg. We did a lot of doctor visits in Paraiso (where we stayed with friends) and later in San Jose, the capital. 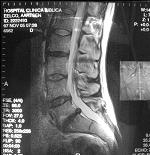 After some discussion with my insurance company they agreed to pay an MRI-scan (525 US$) which showed I have a hernia. Not a pleasant result, but we were glad that we now finally knew what was causing all these pains. And lucky for me I kept in contact with the therapist who helped me in Holland with my Repetitive Strain Injury (mouse arm). She could see the cause of my hernia by sending her pictures. And by talking to her, correcting my posture and sending her new picuters, I managed to get rid of the pain. So finaly, after about 5 weeks we could leave the area of San Jose / Paraiso. Now I have to keep the right posture while sitting, walking, standing etc, but the pain corrects me, so I´ll manage.

Rainy beaches and cloudforest
Before all this misery, we visited some other places in Costa Rica. 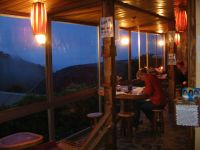 Our first stop was in Playa de Coco. Not a nice town when the weather is bad. And we had an unlucky hand with picking a hostel. The next moring my whole back was covered with bites of bedbugs. We left as soon as possible. The next town was better, we enjoyed Santa Elena / Monteverde a lot. We had a lot of rain there too, but that´s something you can expect in that area. But we had a very nice hostel, with a nice balcony and clean rooms with hot showers! So we just relaxed, celebrated jewish newyear with israelian travelers and enjoyed talking and drinking with other travellers. At the end the weather got better, so even we got out of our hostel to do some small walks. We did not do the expensive tours over there, but we did see sloths, a whole family, very close to the hostel. On the pictures you can see what else you can see there without doing these expensive tours!

No eruption of Volcan Arenal
Our next stop was La Fortuna, to see Arenal erupt. Other tourists spoke of beautifull explotions of Volcan Arenal. But probably because we were not that active, he/she also kept a low profile. A pity, because the volcan is what you come for there. But it still gave us some nice pictures of La Fortuna and surroundings.

Rafting on the Sarapiqui
For once we did do something more expensive. We decided to go rafting on the Sarapiqui. Bas had never done it, and for me it was about 15 years ago (Zambezi river, Zimbabwe), so we did some nice classe 3 à 4 rapids. Very good, and good for your Spanish, because you have to react very quick on Adelante (forward), Atras (backwards), Izquierda (left) en Derecha (right). We do want more rafting, but we´re ready for a bit wilder river. We had no waterproof camera, so no pictures of the rafting in the fotoalbum of La Virgen.

Jumping turtles!
After La Virgen we headed fot Heredia, mainly to visit the best Zoo of Costa Rica. There is always one place where you can see the animals the best, and that´s the Zoo of course. And we had heard that this zoo, the Zoo Ave, was a very nice one. And indeed it was. It´s not only a zoo, but also a protection center where they breed birds and free them into nature again. The zoo is mainly about birds, but also houses all 4 types of Costa Rica´s monkeys. And we saw the quickest turtles we had ever seen, to quick to shoot a clear picture! We´ve got an album of the Zoo and Heredia. But the animals and plants are in a seperate Plants and Animals album.

Visiting Wouter and Nicole
We visited Wouter and Nicole. With Wouter I was on highschool for 6 years in Zaandijk, Holland. After university he moved to Costa Rica and started his own company. We had a (longer than planned) very nice stay with them. They helped us with our first doctor visists, there Spanish is a bit better then ours. But after a while we decided to let their youngest son have his sleeping room back, so we said goodbye and moved to San Jose, for more doctor visits. See the fotoalbum of Paraiso and San Jose.

Two attempts to reach Cahuita
After the whole hernia-story we finaly got the chance to enjoy a bit of Costa Rica. We went to Cahuita, on the Caribean cost. Although, that´s what we wanted. But it was so small, that we forgot to step out of the bus, and ended up in Puerto Viejo. We stayed there one night, but did not realy like the hostel, so we took the bus back to Cahuita. And we were glad we went back. Cahuita was a bitt less touristy, and a bit more a local village. And a beautifull park next door. A park with beautifull beaches connected by a walking trail. And so close by, and not expesive this time, you donate what you want. We walked the trail, enjoyed

the beaches and were stunned by the screaming monkeys. Over there you can imagen a bit how it must have been like, in the 16th century, to arrive on these coasts by boat, on these beautifull, unspoiled beaches, WAUW!! We got a good look at the howlermonkeys and shot some great movies. Including a movie of one mother-monkey trying to cross the street using telephone-calbles. Very unstable, but she managed. All movies are, together with the bounty-pictures in the Cahuita Album. Even of Puerto Viejo we shot some pictures, see the Puerto Viejo Album.

Our route through Costa Rica