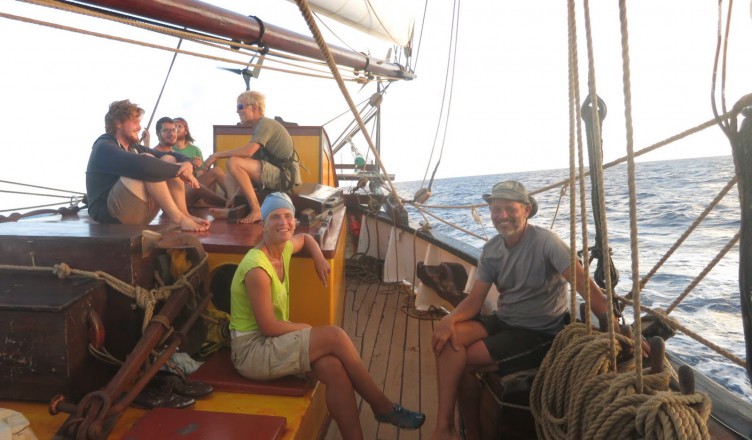 The first days after departure we had with wind force 7 violently sailing weather. And because the ship had been dry for several weeks as good as was the wood shrunk, which for many leakage. Almost all beds had been suffering of incoming sea water and also in the amount of (the gathering place of the for drainage at the bottom of the boat, what we there daily from pumps) billowed up the beds in the water against the walls. 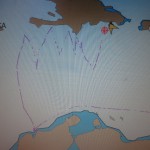 Combined with seasickness and still very high temperatures it was for many a difficult hike. Because we had against wind and flow we came slowly towards Boca Chica in the Dominican Republic. But once we got Cape Beata were over did it a lot smoother. In a few large stewing we get to Boca Chica to there completely on to boating and sailing within.

Photo ´ s of sailing from Colombia to the Dominican Republic.
Photo ´ s of our stay in Juan Dolio

Pucking, while doing the dishes

Because we had such rough weather directly after the departure, people could not first slowly get used to the ship, with the result that there were more zeezieken than normal. Bass is really four days been lousy and was even then still nauseous if they had to go in. For her was eating boasted what was given to her so they had not in the galley. Of course, they had to sleep, so that was no fun for her to the super hot, moist, smelly, leaking in front. That was it for no one, but if you are nauseous is totally refrain. I too had this time suffered from seasickness, especially the first day, I sat to knikkebollen during my wait. I did the dishes together with Christof where he first about his neck went and I soon followed. Fortunately everything flushed away by the high waves that struck over the deck.

After the wind force 7 of the first days it was a lot quieter sailing weather. The captain, however, warned the so-called squalls, sudden weather changes caused by rapidly developing cloudscapes. The command is to continue to look out for threatening clouds. However, it is hard to imagine how such a thing goes … until you get one to your ears. On a quiet night I was the coffee and tea to taking care for the following wait. I had them all aroused and waited on bass to give her a cup of tea in. Then I stepped out and was really surprised by very heavy wind gusts and rain. Lammert then takes the helm and we had to dírect two sails ironing, in the dark, on a dancing ship in the pouring rain. Despite that we were raided by so we had the two sails within no time ironed and was further uitwachten the squall in the pouring rain. Because we were all on deck when already decided Lammert but directly after the squall tack. Our rest period was so pretty shortened, plus even more difficult by the adrenaline that you sleep. But from then it was all clear why we are in this area also, when the sea is calm the harnesses should have already. Because if that squall comes then you have no time to do.

Upgrade to the senior cabin!

Most trainees sleep in the forecastle. As I have described is not the most comfortable stay. The entry for on the bow is also very tight, which in bad weather is made even more difficult because the hood close. There is, however, one cabin with two trainee slaapplekken in the rear piece of the ship. And except that you there but with two man lies are the two entrances to it many times more comfortable. If you with bad weather in the forecastle sleeping you must first you grab and armor, then by the tight entrance you go up Wright, then the whole deck over backwards to the toilet, there your harness off again, do your thing and then all on and off again to return to your place to sleep. On the other hand, accessible from the double cab back and you come through the navigation room directly with the toilet, what a convenience! And then there is also less leakage, a private bedside lamp and several drawers to store your gear. Is called it is still there and it is 100 percent leak-proof either, but it is particularly in cold and wet weather a lot more practical.

The oldest trainees have first choice to be in that cabin to be allowed to sleep, and I leave well the second oldest! Until now, it’s more convenient to work with bass in the forecastle sleeping, because we also shared a lot of stuff. But, now I have to Bas van Board Lammert let you know from now on like in the seniors to want to sleep cabin. The day before yesterday, bass and I therefore all our junk from the forecastle dragged, dried, sorted out and split into what Bass, what they leave on the boat, and what was to become of me in my new home. At the take of my new sleeping place felt it really as an upgrade, long live the seniority;-) I am very curious as to how it is going to give birth to me. 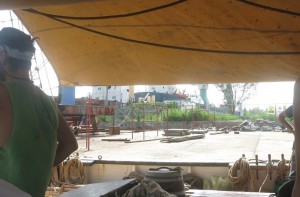 If there’s anything disappointing me this trip it is the moorings of the Tres Hombres. On my earlier trip with the Tres Hombres to Denmark we had fantastic berths. And the first location in Douarnenez satisfied also to those forecast: at the wharf, in the historic port, passing people and shops and restaurants within easy reach. But then it went downhill and we were in oncharmante hard dirty cargo ports, outside the city centre. Boca Chica is called the low point. Outside the port port is certainly too dangerous to walk at night, and also Boca Chica itself is a dirty unattractive place full of ‘ in your face ‘ sex and non-stop hasselaars know. The Tres Hombres is, of course, a cargo ship in the first place, but I had yet on something nicer moorings hoped. I know the people of Fair transport (the company behind the Tres Hombres) here hard at work, I hope that they manage for future tours.

Last days together with bass

As said get Bass here by Board and I go without her further on the Tres Hombres direction Netherlands. The last time so that we have together on this trip. Some 25 Km East of Boca Chica is Juan Dolio, with the most beautiful beaches on this stretch of coast and a lot nicer atmosphere than Boca Chica. We have found a nice hotel, run by a very friendly family. On the other side they have a bar-restaurant and then comes the beautiful beach with blissfully clear water. Wednesday we are going to help with loading the rum but otherwise we are just holiday of the Tres Hombres happen.

On to the Azores

Lammert hopes to be able to leave here next Friday. Failing that then becomes the Monday after. That is a long trip of approximately four weeks. After that there is an extra stop intervened, namely England, after which we then go in the direction of Amsterdam. The originally planned date of arrival, there was september 22, but whether we go get remains to be seen. We already have nearly three weeks delay and an extra stop also costs time. But who knows, the wind perfectly and we fly to the other side.

Until yesterday Bas not yet knew what she was going to do from now on. But a new trainee who walks out here has given her some hints on travel in the Dominican Republic and her hair Lonely Planet. Also the hotel we are in now feels so good that bass decided the remaining time here on the Dominican Republic. And this morning she has her return trip booked, 12 september flies them back on Brussels.

So this Friday or Monday throws Bass off of the Tres Hombres and we see each other again sometime in September. My next post probably comes from the Azores.

Photo ´ s of sailing from Colombia to the Dominican Republic.
Photo ´ s of our stay in Juan Dolio

Sailing from Colombia to the Dominican Republic, the well balanced cargo ship ‘Tres Hombres’ sailed for hours full and by without anybody touching the wheel: