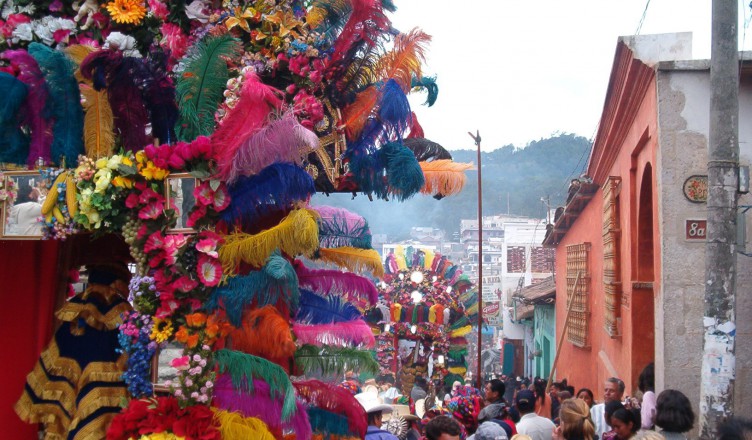 Christmas in Guatemala
Celebrating christmas in another country, where it´s warm, and you´re far away from family and friens is always weird. The real christmasfeeling needs more then a fake christmastree and jinglebells, maar… they doe their best, and so did we!

The market of Chichicastenango (short Chichi) normaly is already a colourfull experience. With christmas they also dance and perform other Maya rituals. With six (Gil from Israel, previous met at Isla Mujeres-Mexico, Lynn from America, Arron and Kay from New Sealand and us) we went to Chichi in the chickenbus.

We strongly recommend visiting Chichi at the end off your trip. Then you can take your souvenirs directly back to home, instead of carrying it with you. You can buy here very nice things for very little money. We really would have liked to buy here something, but didn´t want to carry big carpets in our bagpack for the following years. Someone else already informed howmuch it costs to send things back home: a fortune, 40 euro for 4 kilo. So, not thanks, alas! We stick to our  foto´s of the market of Chichi.

Eelco to the dokter
Since San Ignacio, Eelco´s having problems with his stomach. It looks like something else then the normal travellersdiareha, because it keeps coming back, in combination with fever. After the chichi market it returned again, so we decided it was better to visit the dokter. He took Eelco´s temperature, looked into his eyes, listend to the stomach and the story and draw hist conslusions. Hij prescriptied 2 types of medicin. Let´s hope it works, until now it did. Eelco hapily servived the rich christmasdiner. Pictures of the doctorvisit and some others are added tot the album of SanPedro and the hostel. Go to the 2nd page of this album for the new pictures. 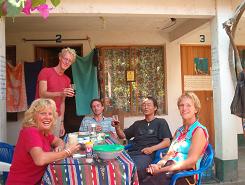 Christmasdiner in the hostel
Togeterh with Kay, Chris en Arron we had a christmaslunch/diner; a big success. Not in the less because the game ´juffen´, changed to Maestro, an dour famous presentgame. The entrées were made by Arron and Chris. The main dish by Kay and Bas, en Eelco made the Sabayone for desert. After the christmasdiner we went tot the centre of San Pedro, to watch the masked ball. See all pictures in our own christmasalbum.

We go on with our study and are curious about your christmasstory…. Already a very good newyearseve and a happy 2005.